Thought for the week: Don’t be afraid to like something 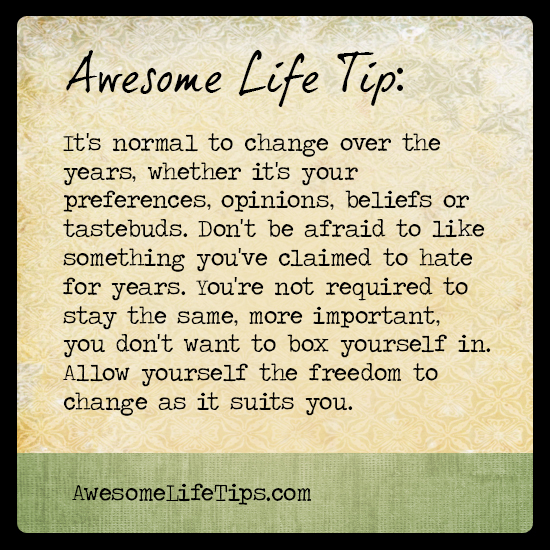 The ability to change your mind is practically a super-power! My mother had a friend (named Victor Mariano Ricardo Alphonzo Ibarguan de Urbay), who was annoyed by the new discoveries in Parapsychology in the 60s that seemed to support the existence of psychic abilities. Since he was wealthy, he sponsored a study at a local college to prove “once and for all” that this was foolishness. The evidence, however, supported the reality of psychic abilities, and Ibarguan accepted the results (after carefully checking the methodology). My mother always used this as an example of the right attitude in science.

I also point out that sometimes internal things change. When I was pregnant, I was revolted by even the smell of liver, whereas when I wasn’t, I loved it (after I got out of my teens). This leads me to believe that often our reactions and tastes may be based on hormones- over which we have no control. Who are known for having strange and unusual tastes that may vary wildly? children, teens, pregnant women and menopausal women are all known for it. Isn’t it more reasonable to accept that it’s fluctuating hormones changing their response to foods than to assume that they are simply trying to annoy us?
If you see (or hear, or smell) something differently one day to the next, it may simply be that your abilities changed. Don’t deny that reality, work with it. It may become an advantage, just as if you get new information, you may need to reevaluate old conclusions.