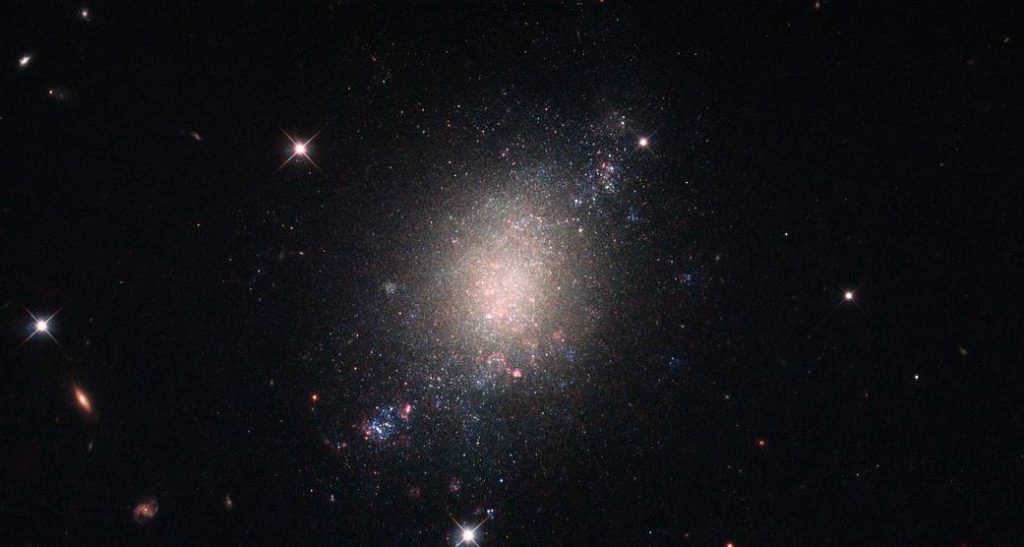 The object in the middle of this image, sitting alone within a star-studded cosmos, is a galaxy known as ESO 486-21. ESO 486-21 is a spiral galaxy — albeit with a somewhat irregular and ill-defined structure — located some 30 million light-years from Earth. The NASA/ESA Hubble Space Telescope observed this object while performing a survey — the Legacy ExtraGalactic UV Survey (LEGUS) — of 50 nearby star-forming galaxies. The LEGUS sample was selected to cover a diverse range of galactic morphologies, star formation rates, galaxy masses, and more. Astronomers use such data to understand how stars form and evolve within clusters, and how these processes affect both their home galaxy and the wider Universe. ESO 486-21 is an ideal candidate for inclusion in such a survey as it is known to be in the process of forming new stars, which are created when large clouds of gas and dust (seen here in pink) within the galaxy crumple inwards upon themselves. LEGUS made use of Hubble’s Wide Field Camera 3 (WFC3) and Advanced Camera for Surveys (ACS). The WFC3 obtained detailed observations of the target objects while the ACS obtained what are known as parallel fields — instead of leaving ACS idle, it was instead trained on a small patch of sky just offset from the target field itself, allowing it to gather additional valuable information while the primary target was being observed by WFC3. Parallel fields played an important role in Hubble’s Frontier Fields programme, which used the magnifying power of large galaxy clusters (via a phenomenon known as gravitational lensing) to explore objects in the distant Universe.