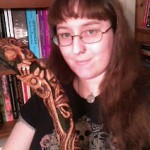 Morgan Daimler has been an Irish pagan since 1991. She is a member of the Druid Order of the White Oak and helps to run an open women’s circle and a neo-pagan Witchcraft tradition in Connecticut. She has also studied the Norse practice of seidhr and is the gythia of a small heathen kindred in Connecticut. Morgan recently published several books that re-paganize prayers and charms from the first two volumes of the Carmina Gadelica, and she has a strong interest in traditional magic and divination. She regularly teaches classes at Pandora’s Box in Norwich CT and has also taught a CT Pagan Pride Day and the Beltane Pagan Odyssey Festival, as well as performing public oracular seidhr sessions in Connecticut and Rhode Island.

“I have had my poetry published in different places including four anthologies: the Pagan’s Muse (under the pen name Seabhacgeal), Voices of the Survivors, and the Pagan Writer’s Present anthologies for Samhain and Yule. I have also had poetry published Circle magazine, as well as Witches and Pagans magazine. I am the author of the self-published books By Land, Sea, and Sky, and Murder Between the Worlds; A Child’s Eye View of the Fairy Faith through Spero publishing, and Where the Hawthorn Grows through Moon Books, as well as Fairy Witchcraft also through Moon Books.”

The Alfar and the Aos Sidhe: Elves in Different Cultural contexts

The World of Faery

Getting your Metaphysical Book Out (with Catherine Kane)

Sacred Well and the Clootie Tree

The Shadow of Death