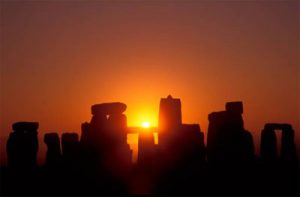 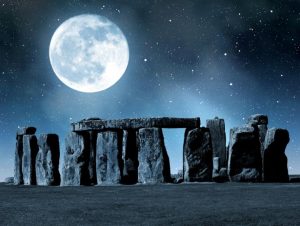 Today is a “once in a lifetime” occurrence, the full moon (Full Strawberry Moon) takes place on the same day as the summer solstice.

The last time it happened was 1967, and it will happen again in 2094- I don’t expect to be around for that. (I’d be 142.) Can you feel the energy? Perhaps not. I am more attuned to the air pressure, temperature, and changing light. But it’s there. Same as the changes in the light and the wind even when we stare at the computer “all day long”. In much of America and Europe, today there will be over 15 hours of daylight (unless you live in the southern hemisphere). Up in Canada and Scandinavia, the sun will hardly set at all. They will be able to see the sun and moon in the sky at the same time. Summer Solstice happens around the 21st each June, but can be on the 20th or 22nd.

At Stonehenge, on the Solstice, the rising sun shines directly on the altar in the center, which it doesn’t at other times of the year. Having the Sun (solar masculine energy) at it’s peak at the same time as the full Moon (lunar feminine energy) is a sign of profound spiritual balance of energies.

Remember to charge your crystals today, and do workings that require catching the flow at it’s fullness.

(If you are so inclined, please join us in sending positive energy to Connie/Aurora our conference Guardian Spirit.)

This entry was posted in Uncategorized and tagged moon, solstice, sun.