Coyote Skywoman on the New Normal: The Alchemist

This week Tchipakkan and her guest Deb CoyoteSkyWoman will be discussing the best seller The Alchemist on The New Normal on www.liveparanormal.com. 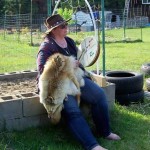 CoyoteSkyWoman, has been a member of the New England Pagan community for the last 30 years, and she has been a practicing shaman for only a little bit longer than that. She works closely with the trickster spirit, Coyote, and has worked with The Sagefire Fellowship and A Sacred Place since their inceptions. A frequent speaker at the Changing Times-Changing Worlds conference, she has spoken on Tricksters, Channeling, Modern and Historical Paganism, and our relationship with the Devine and the Land.
Wednesday we’ll be talking about a powerful book, the Alchemist, written by Paulo Coelho and fist published in 1988. This novel is about a quest by an Andelusian Shepherd, Santiago.
Among the bits of wisdom in this allegory is the idea of your Personal Legend. Your Personal Legend “is what you have always wanted to accomplish. Everyone, when they are young, knows what their Personal Legend is.” also that “when you want something, all the universe conspires in helping you to achieve it.”
Whether you’ve read the book yet or not, the concepts are fascinating.

We’d love you to phone in with questions: 619-639-4606 (live only). If you know you’re going to listen later but have a question, leave a question on the facebook event page, and we’ll try to answer it during the show.

If you can’t tune in 8-9, Live Paranormal.com archives its shows by date, and I archive them by date, guest, and topic on my website: http://tchipakkan.wordpress.com/the-new-normal/directory-of-podcasts/

The New Normal podcast is live 8-9 pm at www.Liveparanormal.com, Wednesday, April 20, 2016   Miss the live show? The podcast is archived here.

While the age of the Internet and social media has had many positive benefits, there has been a strong downside to the increased web connectivity. With a new generation of up and coming witches and pagans making their way into adulthood, now more than ever, there is a lack of diverse groups to support them. The few groups that have survived the technological transition see an increasing influx of people seeking to make an actual connection to each other and the divine. Join us as we explore the changes over the last twenty years as the web online has all but supplanted the process of traditional web weaving.

Join Tchipakkan and her guest Coyote Skywoman as we talk about the benefits and difficulties that come along with this new technology as we embrace ancient religions.

Coyote Skywoman has been a member of the Pagan community in Massachusetts and New Hampshire for the last 25 years, and she has been a practicing shaman for only a little bit longer than that. She works closely with the trickster spirit, Coyote, and has worked with The Sagefire Fellowship and A Sacred Place since their inceptions.
Tchipakkan has been openly pagan for more than 45 years, and has observed many communities in New England and on the East Coast, a lot via internet.