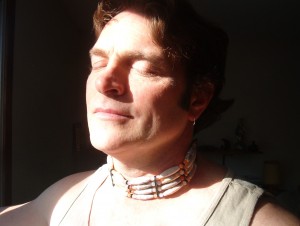 Hypnosis for Healing and Spiritual Growth

Dennis Seavey-Windsinger has been a Hypnosis Practitioner for over three decades. Originally inspired by a demonstration on the clinical uses of hypnosis in the early 70’s, since then hypnosis has been a companion component to everything else he does. He does a great variety of things:  An artist, musician, storyteller, craftsman, healer, teacher, nationally ranked bodybuilder, film maker, author, and actor. Of mixed ancestry, Dennis was surrounded by the oral traditions, ceremonies, and traditional skills of the Elders around him simply as day to day elements in his life.  Dennis had his first conscious  metaphysical experience at the age of five and has been following the pathway of Akichita Wakan’ (the way of the sacred warrior) from that time onward, whether knew or wanted to or not.   Dennis focuses on helping people find the personal connection to those spiritual tools that connect them to the natural rhythm of the universe and the energy of the great mystery.  He currently lives in Central Vermont with his wife Alice and son, Kieren, two dogs, two cats, a confusing number of chickens, and seven part time goats.