Larry hides his keen wit and massive knowledge under an unassuming image of “just one of the guys” and a sarcastic sense of humor.  This lack of flash is based on a conservation on energy. Why be dramatic when you can get things done by simply doing them?

Larry Obern has been a pillar of Changing Times Changing Worlds since 2011, teaching the most basic energy work: Centering, Grounding, Shielding. He keeps people safe, because large amounts of energy whether electric or psychic are often really useful, but not always safe. This year he’s presenting his Psychic EMT- Metaphysical First Response (when you work in a group and may need to deal with other people’s mess ups) and Psychic Self Defense (for yourself). 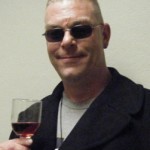 Larry Obern is a third generation Family Traditionalist.  He has worked with Ecumenicon as a teacher for several years.  He was ordained as a priest by the following Organizations:  ULC, Nomadic Chantry of the Gramarye, and Ecumenicon Fellowship.  He continues his clergy under the auspices of the ULC, and Nomadic chantry of the Gramarye.  He has taught basic level classes, as well as the more advanced forms of the same classes.  He offers a wide variety of classes usually at each conference he attends, and allows the Organizers to fit his classes into their Conference.