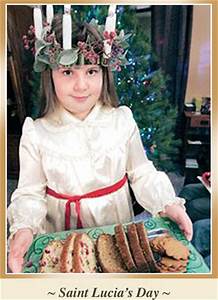 December 13th is the feast day of St. Lucia, an Italian saint whose name means light, which may be why her celebration has been embraced so thoroughly by the people of Scandinavia. Lucia, who’s name means “light” was a traditional early virgin martyr who’s eyes were gouged out before she was killed, and she is often shown carrying them on a platter. As a light-bringer she was well received in Scandinavia where days can get as short as five hours near Solstice (a week after her feast day).

There is a tradition that parents are brought breakfast in bed by the youngest or oldest (this varies, probably depending on age and whether she can safely carry the pot of hot coffee) girl wearing a white dress with a red sash and a wreath with lighted candles on her head, representing Saint Lucia.

My husband created a wreath for our daughters (we used the youngest rule, so the honor would circulate, and they got it when they could carry the tray) with electric candles and a battery pack. I’m sure that is done in many other homes and churches as well. Frankly in an outdoor parade, it would have less likelihood of blowing out, which would seem a bad omen. (not quite so bad as tripping and setting herself on fire, I suppose).

Towns in Sweden and Norway have Lucia parades where one (the most popular) girl is chosen to play the Light Bringing saint and the other girls wear wreaths without candles (boys get to wear cone shaped hats with stars).

I cannot let the day pass without mentioning Lucia Buns. These are sweet bread rolls, flavored with saffron, and they come in shapes which suggest many symbols that pagans and Christians will recognize and embrace: Solar Crosses, Goats, Pigs, Cats, Horses, Wagons, Priests Hair, Lucia’s Crown, Baby, Lyre, Wagon, little boys and little girls, and many others.

I include my recipe below: