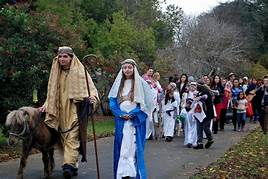 Concentrating on the Christmas story, Christians in Mexico and Central America recreate it over nine days from December 16-24 each year. The name means Lodging, or Inns, and re-creates how Mary and Joseph could not find room at a normal guest house, resulting in the birth of Jesus in a stable.

Children dressed as Mary and Joseph, led by an angel carrying a star shaped lantern, and  followed by other children dressed as shepherds, more angels, and wise men,as well as musicians and parents (“pilgrims” or peregrinos), singing traditional songs as they walk from house to house, stopping at pre-arranged places each evening where they are “refused lodging” from the homeowners in the role of “innkeepers” with another traditional song. Each homeowner also gives them refreshments. Tamales, champurrado and buñuelos are often served, and aguinaldos (small bags filled with treats and candies) are given to the guests. The procession ends at church with a mass, and is followed by a party. Piñata, often in the shape of stars, are broken. The final night, Christmas Eve is the time of the biggest party, after Midnight Mass.