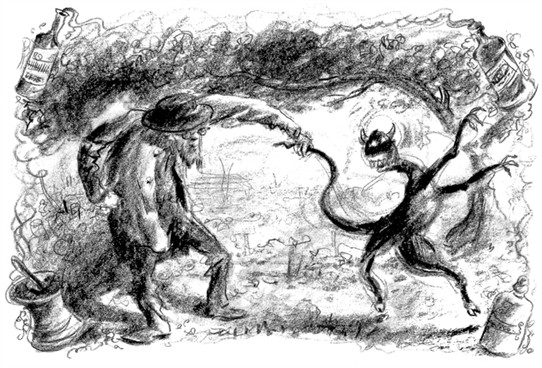 James ‘Cunning’ Murrell, shoemaker, and cunningman, grabbing the devil by the tail by artist David Hurrell.

Cunningfolk were the folk healers and magick users who practiced into to the 20th century in many areas. Called wisemen and women, healers, fixers, virtuous ones, some called themselves white witches, while others insisted they were the opposite of witches, helping to counter bad magick with good. Although what they called themselves varied by region and individual, they were definitely magick users. Even in the modern world as scientists distanced themselves from magick, belief continues, since it’s harder to disbelieve when you’ve experienced it.

Jeffrey Cerneson is a modern cunning man from New England who embraces both the modern and ancient world, combining practices from many cultures.

JEFFREY CERNESON has been wandering the crooked paths of sorcery for nearly 30 years. His journey began after a series of personal and spiritual crises following his involvement in the first Gulf War. His wanderings led him from humble beginnings in Anglo-Saxon traditions to the mountains, temples, and hidden doors of the ancient wisdom of the Wu Shaman of China; those Taoist Sorcerers and Sages who have preserved the old sorcery in their secret martial, healing and spiritual arts. He has been trained as a Daoshi; priest, healer and alchemist, by such teachers as Huo Zhi Lian, Tzu Kuo Shih, and Feng Song, and is accounted a disciple of the Tao. From his wanderings in the Far East, he returned to explore the roots of his own blood and ties to the land of his birth. Being of Abenaki heritage, he undertook an apprenticeship in Native American Medicine ways and healing in exchange for the knowledge he brought from China. There he learned singing medicine, the Medicine of the sweat house and the sacred pipe, and the calling of spirits for healing, power, and balance. As he became a primary singer for an Absaroke Wicasa Wakan (Crow tribe ceremonial leader, and medicine person)., his own medicine grew, as did his yearning for his European heritage. While this training was essential to deeper understanding, it has always been in his own cultural heritage that his heart belonged, so he returned to studies of both his Norman ancestors as well as his Southern French ancestry. He began to re-examine the cunning arts of the Northern peoples on his own. With his newly awakened senses, and comparing what he experienced afar with what has been written and passed down, his wisdom potency and insight have grown beyond what was ever possible for him before those wanderings. Perhaps most important to the integration of all that he has learned, he has studied the Old World Witchery of Southern Europe, and the Etruscans through training and initiation with Raven Grimassi, and Stephanie Taylor-Grimassi. He is an initiated member of the Ash, Birch and Willow tradition and as such is a Pharmakeute; spiritual botanist and also a cunning person of the Greenwood who lives in partnership with the green world as the heart of his life.

Starting in May,  Jeffrey is teaching a on-line, 12 month course: TheCunningArtsandtheCraftoftheWise , check it out.