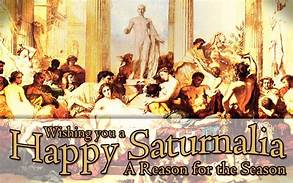 Io, Saturnalia! (it means Hail Saturnalia, and it made my day when I read that it was pronounced Yo.)

Saturnalia was the big celebratory holiday in the Roman Calendar where there were a LOT of holidays. Saturnalia started as a feast of Saturn on December 17th, but was then extended to three days, then to seven. (Sound familiar?)
It was similar to the Greek Kronia, and all work was suspended, slaves were given greater license, and morality was loosened. I think it would remind us of Mardi Gras.
Christmas in early Rome was probably celebrated during this season so that Christians could participate in the general joy and festive spirit. Gifts were not a general part of Saturnalia- they were given at New Years, when the house would be decorated with greenery. However at the end of Saturnalia gifts of candles, wax figurines, wax fruit etc. were given.
Io Saturnalia!