While in Scandinavia Santa Lucia is the gift bringer, in Iceland there are a series of trolls that are the nocturnal visitors before the Christmas holiday. Each comes on a specific night starting on December 12th, and they are more likely to cause trouble than to leave gifts. Each is associated with their particular annoying habit, although Iceland seems to have adopted them and portray them as cute, calling the Jólasveinar 13 Santa Clauses. 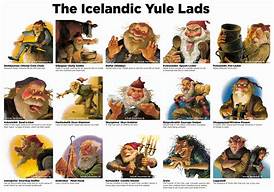 They have a monstrous mother, Grýla. who steals and eats naughty children, and she also has a huge cat called the Christmas Cat which will get you if you don’t have a new piece of clothing for Christmas! 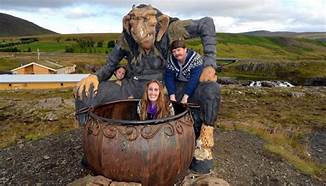 Icelandic Children put their shoes on the window sill and get treats or small gifts (like mandarin oranges or  books) if they’ve been good, and rotting potatoes if they have not. That’s pretty horrible.
One comes each day. On the 12th the first is Stekkjarstaur “Sheep cote Clod”, he has a wooden leg and bothers the sheep.

On the 13th Giljagaur shows up, his name is translated Gully Gawk, and he likes to steal milk from the cowshed.
On the 14th Stubby aka Stúfur steals baking pans in order to eat the crusts remaining.
On the 15th Þvörusleikir comes, his name means Spoon Licker, whether because he is thin as a spoon handle or likes to lick them, it could be either. Apparently Grýla  does not feed her children particularly well.
December 16th is Pottaskefill day. Pot-scraper is after leftovers in the pots (could these be aimed at getting the kids to get to the dishes right away?).
Askasleikir or Bowl-licker hides under beds waiting to steal bowls people set down. This suggests that they are eating in or near their beds? The Askur is a lidded bowl, which one would think would keep the food safe- but not if you lose track of it!

By the 18th, people must have begun to watch their food and animals, but Hurðaskellir Door-slammer slams the doors, especially after people have gone to sleep, waking them.
December 19th Skyrgámur comes to steal the Skyr- which is a sort of Icelandic yogurt or soft cheese, oh, my goodness it is fantastic! In summer it’s eaten with fresh fruit, in winter with a drizzle of honey- I understand Skyr Gobbler! That’s the one I’d play if they were assigning roles!
December 20th you want to keep your eye out for Bjúgnakrækir whose name means Sausage-Swiper, three guesses what he’s after!
Window Peeper, or Gluggagægir peeks through windows on the 21st (Solstice).

On the 22nd Gáttaþefur shows up with a large nose and an acute sense of smell. Traditionally he’s sniffing for laufabrauð. This is a VERY flat pancake/cookie that is decorated with perforations.

On December 23 things get serious. Meat-hook Lad aka  Ketkrókur will hook the meat right out of your cauldron (did he practice that on his mom’s? Ick!)
The last Yule Lad shows up on Christmas Eve. His name is Kertasníkir, and he steals tallow candles to eat them (like old fashioned McDonalds Fries- only no potato).