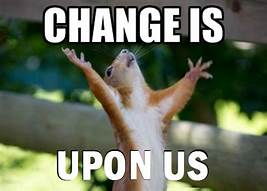 I love this image. Heaven knows why this squirrel was posing like that, but it does look like a human asking the universe why more is going on than we think we can deal with, doesn’t it?

It is the Great Squirrel Prophet telling the forest that Doom Approaches! But while cats abound, a tree may be felled, cars zoom past going faster than small creatures can dodge, and sometimes a squirrel may collect and store plastic maple spiles rather than nuts (true story, a wood cutter friend of mine took down a hollow tree and thousands of them poured out- the poor thing probably found them sweet tasting, chewable and convenient, but probably didn’t make it through the winter), each year there are more squirrels born, and the species continues.

This helps me remember that while our way of life may be changed nearly beyond recognition, and no one of us is guaranteed immortality, as a species, we go on. In the 6th century the first round of the Bubonic Plague wiped out 90% of Europe in the places it reached, in the 14th century it only killed 50%, mortality in the third Pandemic was even lower. As a race, we adapt and survive. Each time wars stopped, and trade, while it slumped, quickly resumed. The survivors created new cultures with better conditions, at least in part because facing down death with little control teaches us valuable lessons in what’s important.
When we pray for and end to conflict, and the upper classes exploiting the lower classes, all the other things that scare us, we aren’t intentionally asking for natural disasters, war, famine and disease, but those things have come to every age, and each age deals with it. There will be change. But it may be a brave new world coming.
So maybe the little fellow is opening his arms to embrace it. Perhaps the words interpreting the image are more important in how we see it than we imagine.