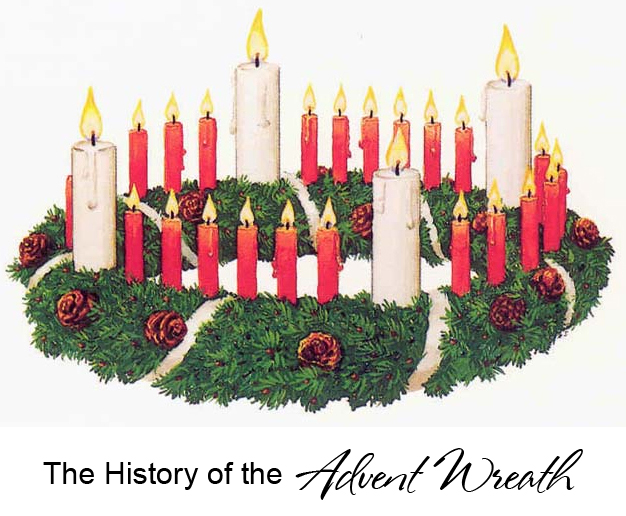 Advent, the period leading up to Christmas, dates back to 567 CE when monks were ordered to fast during December. The Advent Fast, similar to Lent, sometimes started November 15th, and sometimes started the fourth Sunday before Christmas which might be as early as November 27th or as late as December 3rd.
The days of Advent are fast period during which Christians may abstain from meat and dairy, or even fish, oil, and wine. During this period people make the Christmas treats and decorations that will be consumed and used during the 12 Days of Christmas. Advent is a time of prayer and doing good works to ready oneself for the holy day.
There is a lovely story of a 19th century theologian Johann Hinrich Wichern inventing the advent wreath. He had opened a home for poor children, and noticed that they had a hard time with the idea of how long it was until the Big Day. So he made a ring of candles- Big red ones for Sunday, with a small white one between for the days of the week, and lighted one each day. This give the children a visual way to see how long it was until Christmas.

Each Sunday has a theme, although there are different traditions for what theme each represents: Hope, Peace, Love, Rejoice (or Faith, Hope, Charity, Love) or the Prophets, the Bible, Mary, and John the Baptist. The Mary candle is often Pink. Sometimes the wreathes are suspended- often in Churches, but also good in homes with small children and cats!