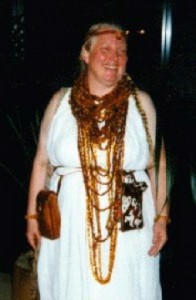 Jane T. Sibley, Ph.D., is a traditional Norse practitioner and a specialist in Norse folklore and  runes.  She has taught at many Pagan events for decades, including at Rites of Spring, Feast of Lights, Twilight Covening, Beltane, Ecumenicon … the list goes on … and created MithraCon, a conference on Mithraism and other cults in the Roman Empire. Her books, “Norse Mythology…According to Uncle Einar”, “The Hammer of the Smith”, “The Divine Thunderbolt: Missile of the Gods”,  and “A Different Dragon” are available in the dealers’ room, along with her spices & seasoning blends,  teas, and coffees.

Communication with the Gods

Cult of Mithras in the Roman Empire

The Wise Tradition in Scandinavia