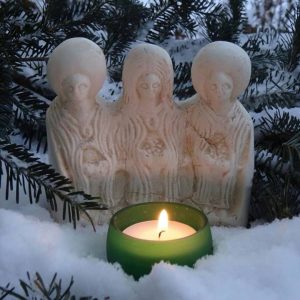 While discussing the calendar before Christianity came to England, the Venerable Bede wrote in the 725 ce:

“That same night, which we so sacred, they used to call the term Pagan Modranecht, namely, “the night of the mothers”, because (we suspect) the ceremonies were named after him.”

Pope Gregory suggested that the missionaries to England should hold Christian feasts on the dates and in the same places (reconsecrated as Churches) where the heathen had been accustomed to have their pagan feast, and in this way to use their habits to bring them over to Christianity.

Mothernight, as with so many other heathen customs, are pieced together from the very few bits and pieces that survive, and we know very little about what was really practiced. Those who recorded the history were more interested in having those customs forgotten than preserving them. It is generally thought that the Mothers to whom Bede referred are similar to the Idisi, Norse Disir, or Germanic Matres and Matronae (associated by some with the Norns, or by others to female ancestors). The date is suspected to be the Winter Solstice, (or as I heard it the eve of the Solstice). They may be also be associated with the night-flying “Good Ladies” who visited homes accepting offerings and giving blessings or the troops lead by Mother Perchta, or Diana, who was mentioned by Bishops in the 9th century as being a fallacy to which women still clung.

Others interpret Bede’s description as meaning that Mother Night is the celebration before Christmas- or Christmas Eve, which allowed them to re-dress it as a celebration of Christ’s mother. Other’s equate it with Disting, the feast of the Disir which many Heathen’s celebrate in January- some conflating it with Candlemas/Imbolc.

The long and short of it is that modern Heathens must create whatever ceremonies and rites that seem good to them to reflect the relationship that exists between them and their gods, as there are few surviving records of their earlier practices.

This entry was posted in Uncategorized.